Sharae Honeycutt shared her story about the importance of advocacy on behalf of Voices for Children, for National Crime Victims Rights Week task force meeting.

“Empowerment is one of the greatest gifts you can give someone,” said Honeycutt. “You give them love, strength and freedom.” 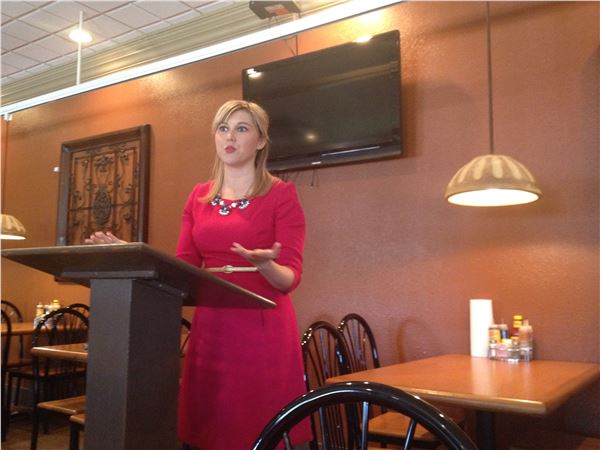 Honeycutt is a reporter for KFVS12 and volunteers with Voices for Children as an advocate.

“At 16, I ran away from a foster home,” said Honeycutt. She added that was a difficult thing to say.

Honeycutt said her mother had bi-polar disorder and she was afraid she would end up with the same fate. Her father had primary custody of her, and she said while he was never abusive, like most teenagers, the two did not get along.

She described herself as, “mad at the world,” when she went into foster care at age 14. She said she was, “scared and hopeless that she would get sick too.”

According to Honeycutt, she saw school as pointless. Even though her teachers said “she had excellent potential,” she did not put forth the effort because it would all be for nothing because she believed she was fated for the same sickness as her mother. Honeycutt described her two years in foster care as “chaos.” She lived in two counties, six placements including two group homes and was enrolled in six high schools.

Honeycutt also pointed out some good experiences while in foster care such as getting to live with different people of different cultures. She encountered families who genuinely cared for their foster kids and wanted to do as much good as they can and others who did it for financial reasons. Honeycutt said she left foster care at age 16 and ended up in an abusive relationship.

“It took me four years to realize that I deserved better,” she said. Honeycutt described a time she locked herself in a bathroom, sat on the floor and said to herself, “This is not my life. I do not want be a casualty of my mother’s illness.”

She said “I don’t know what my life is. Being moved wasn’t who I was. I wanted to succeed.”

Honeycutt said the importance of advocacy for children in foster care is to give children support who may never get any. She said she did not have an advocate while she was in foster care, but learned to be her own advocate. Children need advocates to “interject themselves into the lives of children who need it.”

According to her there were a lot of people in her life that “served a purpose, and were trying to manage the situation, but no one was looking out for the single best interest for me.”

Honeycutt said she pulled herself up and said, “This is my life and its worth fighting for.”

Honeycutt said she made up with her father, “Dads love their kids unconditionally.”

She earned her GED at 20 and worked in coffee shops and as a recruiter. Honeycutt said she realized at age 25 she was never going to be bipolar, “you are not like your mother.”

Honeycutt finished at San Francisco State University at age 30 with a degree in broadcasting. She worked an internship with the NBC Nightly News and Today Show and worked with Maria Shriver. She said she is “truly blessed” to get the life she lives.

“There are thousands of kids that need that fresh start,” she said. “A child does not get to choose the situations in their life and they need adults to guide them so they are happy, healthy, and know they are loved and supported.”

Linda Nash, director of Voices for Children, said the agency is looking to take on more volunteers.

“Some kids may not have anyone else and there are opportunities to develop a strong rapport,” said Nash. “Advocacy is an important way to serve victims who are unable to serve themselves. There are a variety of children who don’t have anyone to speak for them.”

Honeycutt described her experience as an advocate as, “worth it,” and encouraged attendees to become advocates, “Kids don’t chose how their lives start and we need adults to help us make good choices and guide us.”

For more information on Voices for Children, go to https://www.facebook.com/Cape.CASA/